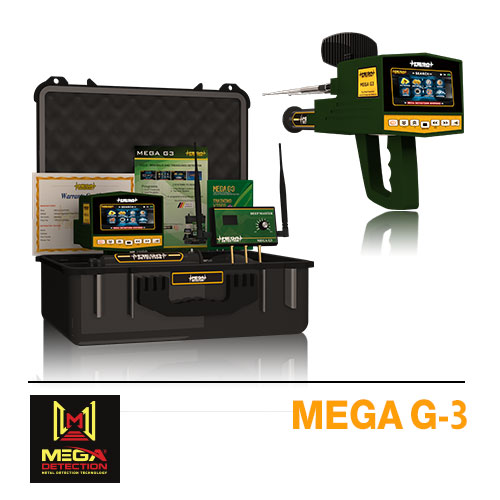 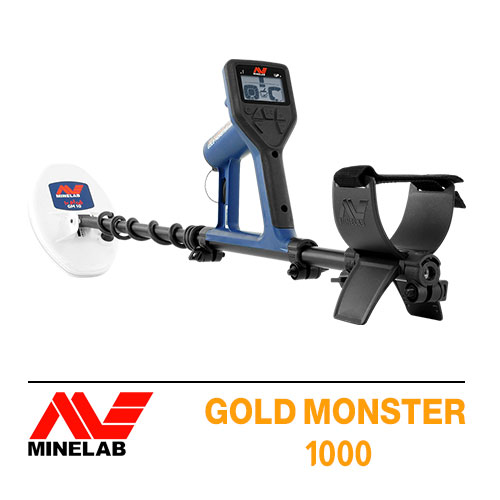 The Mega Gold device is a Sensory system Gold Detector contains four detecting programs for rough gold, gold treasures, silver, and diamonds, it is a German device that has won the admiration and appreciation of many users as it has proved its effectiveness with all merit.

Thanks to the long-range sensor system, now the user of the device can explore treasures and minerals for underground depths up to 30 meters And a front search range up to 2000 meters on the ground surface

This method enables the user to locate the target accurately and gives him a better ability to verify the target’s validity.

The box around the target can be completed with a distance of 200 cm from the center of the target when the user is in the same line with the target and the antennas turn to target.

When using the device to search for the following objectives: Diamonds, precious stones, and platinum

Wait three to four minutes Stand on the target and monitor the antennas which are turning to one side and that will be the first point of the signal,

After moving from the target point you will notice that the antennas will gradually move forward.

Then Stop when the antennas turn back on one side and that will be the second point of the signal,

And then at a distance of 45 degrees from the second signal point. The user had to conduct several measurements for measuring the depth more accurately

the digital voltmeter on the Deep master will show the electrical voltage of the battery and you will hear an increase in the sound vibrations directly.

In this system, if the user holds the device in a tilted and not vertical way, he may get the wrong result. Therefore, the sensor should be kept vertically at 90 ° angle.

The User can increase or decrease the magnetic sensitivity according to the terrain conditions using the left and right arrows, and he could also control the speaker’s volume through the button on the speaker cable

Note: Always check the accuracy of the target after the appearance of a signal on the screen, You must reset the device outside the target location, by long pressing the button in the far right of the control panel, and if repeated signal mean
that the target is real with a 100% percent

The device has built-in filters that work to identify the signal accuracy and confirmation of its existence.
The signal reception range starts from 250 meters and up to 2000 meters in the front range. In extreme depths, It is up to 30 meters in the ground.
It has accurate determination of the size of the target and signal strength via a built-in analytical program in Mega Gold system.

Mega Gold device incorporates a lot of smart and advanced technologies for detection of gold.
Mega Gold includes Mega Detection technology which detects buried targets signals, by using special antennas designed exclusively to receive the weakest signals from buried targets.
The most important feature of Mega Gold is the ease-of-use feature with ergonomic, comfortable design of the system box, and its handle.
It has easy-to-use control panel for adjusting device program settings and high-resolution colored display screen as well as a simple software program for both individuals who are using the system for the first time or professionals.

The unique Mega Detection technology in Mega Gold, was classified in first ranks globally by German and international organizations working in field of gold mining and metal detection.
Mega Gold works using high-precision frequencies to identify different targets, like gold and silver in all terrain and soils types.
The device has been manufactured using high quality plastic materials. Its electronic circuits are not affected by heat or coldness.

AVAILABLE LANGUAGES
Mega Gold has a simple easy-to-use multilingual graphical user interface available in 8 international languages. The user can select one of them from the Languages menu when the device is turned on, the device will still work in this language even after the shutdown and restart.

THE LCD SCREEN
When the device is turned on, the high-resolution colored screen will display all settings and options like selecting the language, selecting the search system, and then specifying the target type to be detected.

LASER SYSTEM:
This new technology included with the device, Laser Locating System is used to determine the right direction of the detected target from a long distance and help the user locate its direction visually.

LONG LASTING BATTERIES
The device works using durable lithium-ion batteries. It can be easily charged and it provides between 10-15 hours of continuous operating time. The device is also provided with the a normal charger and travel adapter .

All components and parts of Mega Gold device are protected with sponge and placed inside high-quality waterproof bag.

The bag includes following parts:
– Main Electronic Unit (System Box) which contains :
• TFT LCD display screen
• Control Panel that contains buttons to adjust settings
• Battery (inside system box)
• Search unit which contains sockets for antennas and signal booster radar
• Button for laser activation
• Charging indicator
– 2 Search antennas (plugged in the front of the rotatable search unit)
– Signal booster Radar (mounted on the top of the rotatable search unit)
– Deep Master (the depth measurement unit) comes with 2 antennas and 3 pegs.
The antennas must be plugged to the two sides of the unit. The 3 pegs must be attached to the unit and then planted in the ground.
– Durable Lithium battery that lasts for 15 hours of continuous usage and operation.
– AC charger for charging the battery and Deep Master unit.
– Travel adapter (Car charger)
– User Manual
– An instructional Training DVD disc about how to use the device.
– Warranty Certificate from the manufacturer 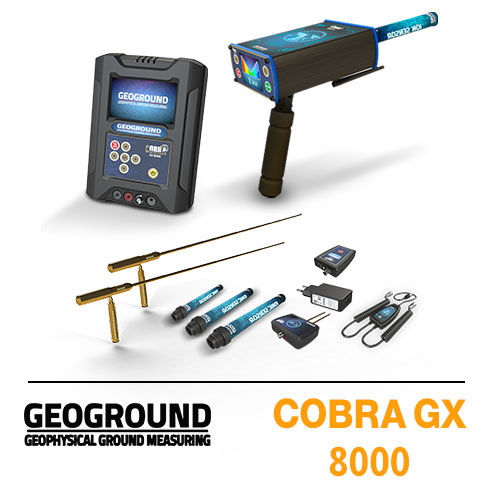 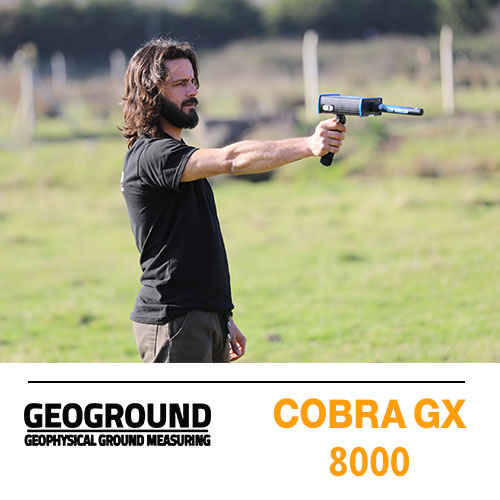 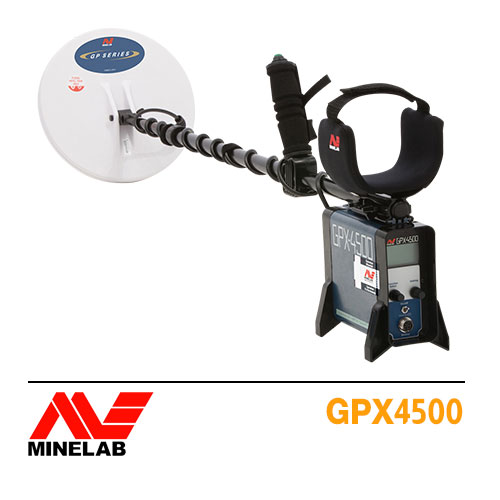 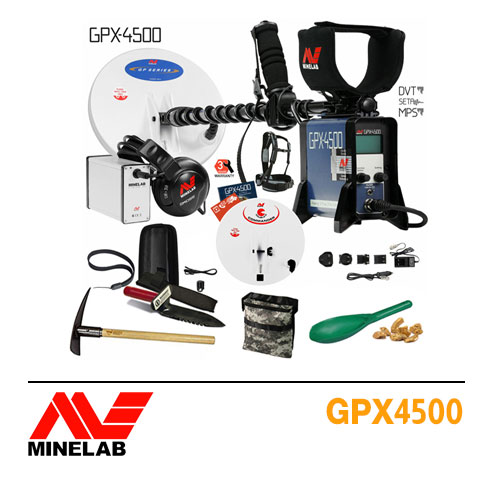 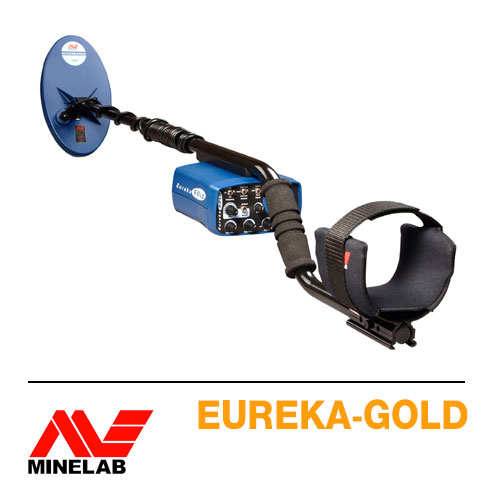 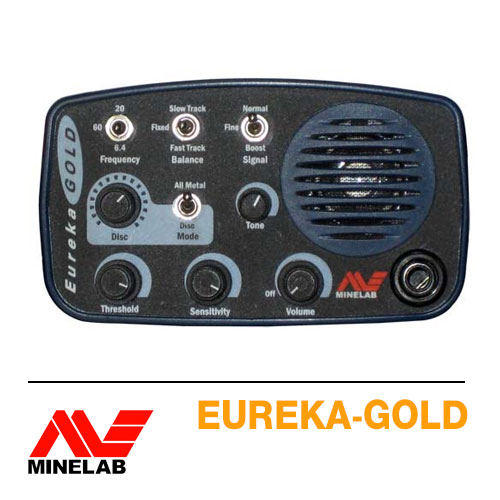 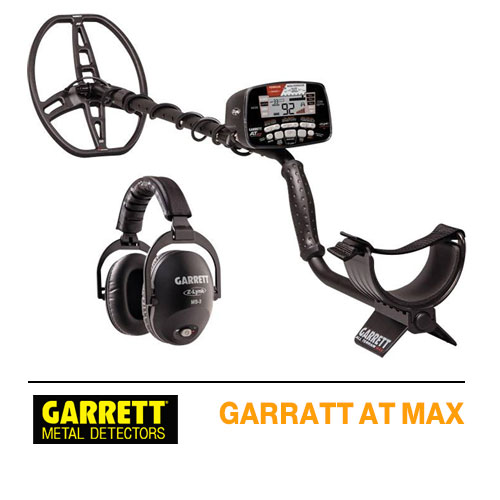 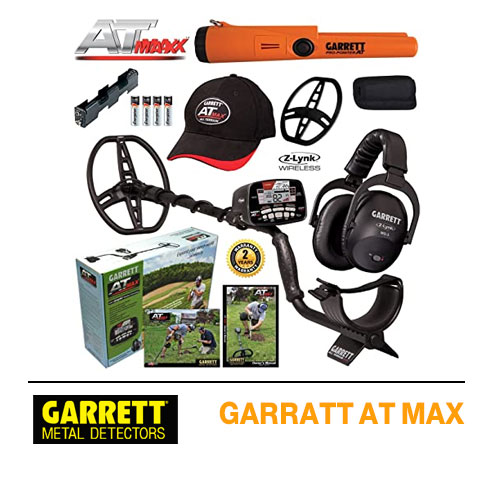